Singapore is a nation that tries to continuously improve, sometimes to the extent of reinventing itself once every decade or so. From a sleepy fishing village that Raffles "discovered" in 1819 to the modern metropolis that it is today, the transformation has been awesome. It has been widely acknowledged that the "secrets" of Singapore's success lie in: visionary leadership, competent and clean government, good public sector-private sector-people sector collaboration, and adaptability to the dynamic global environment. Singapore has generally been very receptive to good ideas - whether original or borrowed, it doesn't matter. Someone once said that "the only way to have a good idea is to have lots of ideas". Anyway here's a couple of wild ideas from me. Even if only one is deemed useful, and gets developed into something of value, I reckon I'd have achieved my goal.

There've been a lot of public complaints about the Electronic Road Pricing (ERP) system that's widely implemented in Singapore. Many feel that the increasing number of gantries located all round the island have made it too expensive and create an unnecessary burden for Singapore residents. The government has repeatedly explained why the ERP system is necessary to control traffic in this island-state, while enabling more to own cars if they can afford it. Let's face it. ERP is here to stay. But is it necessary for ERP to always have this negative association for the public? I have a wild idea to position ERP gantries slightly more positively among vehicle drivers - implement an ERP Lottery! Let me explain. Since there is already an integrated computer system behind the ERP network, it shouldn't take a lot of programming to randomly pick say one or two cars a month to "hit the jackpot" and instead of having money deducted as they pass under the gantry, let the lucky car owners win some money. Imagine the gantry sign suddenly flashing "Congratulations, owner of vehicle SGPxxxx - you have won $1,000", after which the money will be credited to their bank account (I'm not sure if it's technically possible to credit the cashcard on the spot). Compared to the hundreds of thousands of dollars deducted from cashcards each month, a couple of thousand is a very small amount to create goodwill and generate a more positive view on the ERP, while at the same time injecting a sense of fun into the system! Furthermore, I rather think this is in line with the nation's move towards allowing IR ...

(2) Call it "Global Talent" not "Foreign Talent"
I'm sure some would say I'm just playing with words, that this is just semantics ... but I think the term "foreign talent" is a pretty sensitive one in Singapore. It is emotive and potentially divisive - it implicitly categorises the working population into "local" and "foreign" talent, with the underlying concern or fear in some quarters that the "foreign" talent will take away jobs from the "local" talent. Well, I say we move away from such thinking, and a good way to begin is to change the words we use. My suggestion is to drop the term "foreign talent" altogether, and replace it with "global talent". Few would disagree that Singapore needs global talent in order to be a global city. Also Singaporeans are considered part of global talent. So the challenge to Singapore is to make itself attractive to "global talent" (from outside) at the same time continuing to develop Singaporeans to be more "global" in skillsets and outlook themselves. Eventually there will be a healthy flow of global talents into and out of this island, working for organizations in Singapore as well as Singaporean companies located in other geographies. Make sense?

(3) Teach "Entrepreneurship" to the children 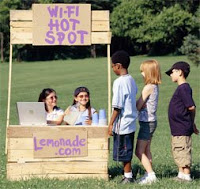 Today, in the primary schools following MOE's curricula, the students study Maths, Language (English + their mother-tongue) & Science. These are important foundational subjects and should be continued. I would however suggest that a new subject called "Entrepreneurship" be introduced from say Primary 4 onwards. This would teach the young ones the value of money, and get them to think of how they can develop their skills to earn an honest income. It has been observed that in general Singaporeans today lack a strong entrepreneural spirit. Many (especially graduates) prefer to work for established corporations rather than go into business for themselves. Perhaps planting the entrepreneural seed from an earlier age, as I've suggested, is one way to remedy the situation for the next generation.

(4) Singapore as location for a hit movie/TV series
Singapore needs more visitors. A whole lot more. One way is to showcase the island-state through a Hollywood-style movie - better still a hit TV series (since it runs longer and is potentially viewed by more people) filmed on location. Think along the lines of CSI New York, CSI Maimi, CSI Las Vegas ... CSI Singapore? The idea obviously is to expose more people to Singapore, and create a desire to come and visit. This is essentially a tourism attraction vehicle. It will also be a means to send out appropriate city branding messages. The trick is to make a hit show - to achieve this, perhaps it is necessary to get the best expertise from Hollywood or other movie-making centres ...

(5) "Dome" up an area and control the weather within

Singapore is such a green place. There has been careful planning that ensures that lots of plants, trees and other foliage dot the the local landscape. There are also many parks and nature reserves. However, I've always thought that it's a shame that our hot and humid tropical weather prevents these parks and nature reserves to be used as fully as they could be. In contrast, in temperate countries like UK or parts of US, there are stretches of the year, especially during Spring, parts of Summer or Autumn where it is a real joy taking leisurely walks or having picnics in the parks. My suggestion - and this one is probably the wildest idea of the list - is to use appropriate technology to build a large "dome" around a certain designated area like a park, such that the weather within the dome can be controlled. A nice 15-20 degrees C would provide conducive environment for a variety of recreational activities. Or maybe at certain times, we could simulate a winter scene ... the possibilities are endless.

Anyway, hope you enjoyed these somewhat wild ideas. Perhaps (and I hope) some of them may not be so wild ...
Posted by James Yong at 11:16 PM

Ideas (1) and (5) are very interesting. Someone in the Gah'ment should take note . hehe.

haha the ERP idea might defeat the purpose of having ERP because Singaporeans, being the Singaporeans we are, might all be flocking pass gantries instead of having it control traffic! So it'll be causing more jams!

For the dome, there'll be giantic greenhouse like Conservatories at the upcoming Gardens By the Bay that will be tuned to temperate condidtions to maintain native plants. Cool eh!

As for the dome, cool indeed! Seems the future is already almost here ;-)

I like the idea in money no enough. If you go onto an ERP area and find yourself in a jam, the government should refund the ERP charges because bascially you are net-off in the same state as when there is no ERP