Sawatdee! This week I was back in Bangkok for some meetings. I was last here about three months ago, and I remember things didn't go too well on my last day - my meetings overran and in my haste to check-out, I left my toiletries bag in the hotel room, then I was caught in a massive traffic jam enroute to the airport, resulting in my missing my flight and having to book myself on a later one. Thankfully things went much smoother this trip.

Despite small hiccups like the above, Bangkok is still a very nice place to spend time, as long as the weather is cool - as it was this time in November. The day I arrived (12th Nov) happened to coincide with the festival of Loy Krathong. This is one of the most popular festivals of Thailand celebrated annually on the Full-Moon Day of the Twelfth Lunar Month. This is a time just after the rainy season is over and there is a high water level all over the country. 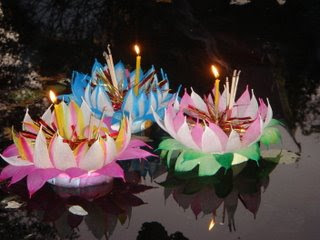 "Loy" means "to float" and a "Krathong" is a lotus-shaped vessel made of banana leaves (though these days, one can get the more snazzy but less authentic looking plastic ones) .The krathong usually contains a candle, three joss-sticks, some flowers and coins.

I read that the Loy Krathong festival dates back to the time of the Sukhothai Kingdom, about 700 years ago. It marked the end of the rainy season and the main rice harvest. It is based on a Hindu tradition of thanking the Water God (or Goddess)for the waters.

Thus, by moonlight, people light the candles and joss-sticks, make a wish and gently place their krathongs on the water in canals, rivers or even small ponds. At a park near the hotel, I saw some children launch their brightly lit vessels in a canal (river?), and it was a beautiful and serene sight watching as scores of these krathongs drifted along. It is believed that the Krathongs carry away sins and bad luck, and the wishes that have been made for the new year are due to start. The festival was accompanied by firework displays (which I heard and saw in the distant sky) as well as shows and the so-called "Noppamas Queen" beauty contests (which unfortunately I didn't get to witness).

Indeed, in this time of global financial woes, it is especially apt time for such a festival, and I reckon it might even be a good idea to introduce a Global Loy Krathong to comfort the thousands of people around the world whose savings, jobs or livelihoods have been affected.

Ladyboys
For this next section, I hasten to qualify that my interest in this subject is 100 percent academic - it is more of a social or anthropological study ;-) I'm simply keen to find out why there is such a distinct (some might even say "flourishing") transvestite sub-culture in Thailand. How did it develop and why is it more prevalent here than in other Asian countries I've visited?

Wikipedia has this to say under "Kathoey":-

The term "kathoey" is not an exact equivalent of the modern western transwoman — it suggests that the person is a type of male, unlike the term sao praphet song, which suggests a female sex identity, or phet thee sam, which suggests a third gender. The term phu-ying praphet thi sorng, roughly translated as "second type of woman", is also used to refer to kathoey. Australian scholar of sexual politics in Thailand Peter Jackson claims that the term "kathoey" was used in premodern times to refer to intersexuals, and that the usage changed in the middle of the twentieth century to cover cross-dressing males. The term can refer to males who exhibit varying degrees of femininity — many kathoeys dress as women and undergo feminising medical procedures such as hormone replacement therapy, breast implants, genital reassignment surgery, or Adam's apple reductions. Others may wear makeup and use feminine pronouns, but dress as men, and are closer to the western category of effeminate gay man than transgender. Kathoeys are often identified at a young age, and are considered to be "born that way". They may have access to hormones ... and medical procedures during their teenage years.

To guys reading this who have never seen any Thai ladyboys, don't be too smug thinking a macho man like yourself would never be fooled by a man cross-dressing as a woman. Believe me, through the wonders of cosmetic surgery, make-up and behaviour, some are more beautiful and lady-like than real ladies. Sometimes it is hard to tell ! 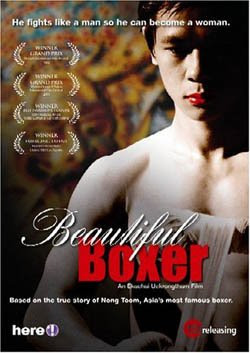 The most famous Thai ladyboy is probably the former champion kickboxer Nong Tum, whose life story has been featured in many articles (eg. refer to this one in National Geographic) and movies ("Beautiful Boxer" directed by Ekachai Eukrongtham)
I admit I'm no closer to finding the answer to why the "kathoey" culture is so prevalent in Thailand? Is it in the societal DNA of the region? Is there some evolutionary implication? Is it something that has been around for centuries in different lands but just more prominent here because the Thai society is more liberal? I don't know. But what I do know that this sub-culture is bringing in many fascinated tourists to Thailand.

Interestingly, I also learnt that "The Ladyboys of Bangkok", a fun-filled and glamarous cabaret show featuring more than a dozen beautiful Thai transvestites, is one of the most popular regular features of the Edinburgh Fringe festival each year. I kid you not. Check out their website at http://www.ladyboysofbangkok.co.uk/

Without looking too hard, anyone can quite easily find many illegal activities happening on the streets of Bangkok each day - from the DVD pirates, to sellers of fake watches and handbags, to seedy-looking saunas and massage joints - but there is one activity that's a lot more animated (pun intended) than the others. I'm talking about elephants in the streets of Bangkok. 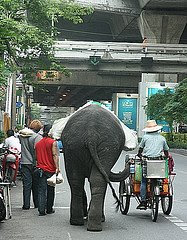 Our pachyderm friends aren't supposed to saunter down the city's streets as they do almost every day. For at least two decades the giant gray beasts have plodded through this giant gray city, stopping off at touristy areas where their handlers peddle elephant snacks of sugar cane and bananas to passers-by, especially in the evening time. Just five minutes from my hotel at Erawan, I know exactly where I should go to have a more than a fair chance of sighting an elephant on any given evening.

Elephants on the streets is of course in violation of several Bangkok Metropolitan laws. However, the police simply shrug, politicians periodically order crackdowns but it doesn't seem to have made much difference (at least as far as I can tell). Animal lovers despair, especially since there have been a number of road accidents involving elephants, with a recent one ending in the tragic death of an elephant and a child.

The creation of a Stray Elephant Task Force in 2006 didn't keep the elephants off the city streets. Nor did the team of undercover elephant enforcers (the E-Team?) who periodically cruise through Bangkok on motorcycles scouting for the beasts.

My view is that enforcement should be stepped up, and elephants ought to be kept off the streets. Elephants are after all a symbol of Thailand, and should be cared for in special sanctuaries. However, I do admit that being able to see, pet or feed an elephant within Bangkok somehow does add to the charm of the city. So perhaps a middle-ground could be determined, with special areas (free of vehicular traffic) being set up to allow tourists some interaction with these majestic beasts.
.
Bangkok is a most interesting city. Its people are hospitable, and its cultures and traditions enchanting. Despite the political problems Thailand is currently going through, a casual visitor to Bangkok would never know anything was amiss (unless you try to go to Government House, where the protestors are still staking out). My best wishes to all my Thai friends. I hope everything works out well politically and economically.
Posted by James Yong at 12:12 AM

Elephants, like dolphins and whale sharks, are gentle, intelligent creatures; but there are still many savage people who mistreat, hunt and kill them.

The Japanese, in particular, love to kill whales and dolphins for "research". Not too long ago, in the 1930s and 1940s, Japanese doctors and scientists routinely cut open Chinese and Korean prisoners for medical research. They couldn't do it now to land mammals (the Chinese and Koreans) so they do it on marine mammals, probably to satisfy some "bushido" instinct in their national psyche.

And these ladyboys are not just from Thailand alone. They are from practically every ethnic group and nation -- white, black and tan!