On Putrajaya and the MSC

I visit Kuala Lumpur, capital of Malaysia, quite regularly as part of my job. I was there again only last week for various meetings. As my professional and business focus is on public sector initiatives (ie. initiatives by government ministries and agencies), one place that I visit pretty often is Putrajaya, the 5,000 hectare federal administrative capital located south of Kuala Lumpur city centre.

Putrajaya, and its "sister city" Cyberjaya were created within the Multimedia Super Corridor (MSC) since 1996. The mega-project was a brainchild of former Prime Minister Tun Dr Mahathir. When one looks at the gleaming buildings, mosques, roads, bridges and other infrastructure there, one can't help but be awed by the amount of investment and effort that must have gone into designing and developing this place. It is even more impressive to note that as late as 1997, much of this area was covered by acres of oil palm plantations.

I remember when I first went in search of Cyberjaya and Putrajaya in 1996, shortly after they were officially launched. When I hopped into a taxi in Kuala Lumpur, and told the driver I wanted to go to Cyberjaya, he looked at me totally without comprehension as he had never heard of the place before. When I finally directed him towards the area, we drove around in circles looking for the MSC Headquarters - which turned out to be a series of low-rise buildings (called Cyberview, if I'm not mistaken) that resembled more a resort rather than an office. 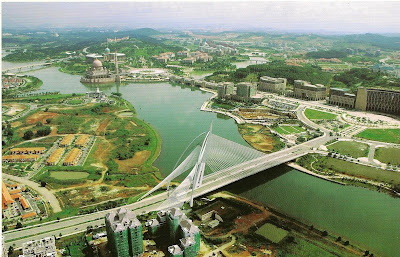 Although it is surrounded by the state of Selangor, Putrajaya is a federal territory, just like KL and Labuan. It is now the Federal Government Administrative Centre, with most of the ministries having been relocated here. The government has also built many residential apartments here (with attractive discounts to entice civil servants to relocate there), and schools, shops, sports facilities, gardens and so on, are all sprouting up in the area. An express train now links the area with KL International Airport (KLIA) as well as KL City Centre.

Many people who have been to KL may not have visited Putrajaya, so I'd just like to point out some interesting sites there - the Prime Minister's office at Perdana Putra, the Putra Mosque, the man-made Putrajaya Lake, Istana Darul Ehsan (one of the residences of the Sultan of Selangor), the ultra-modern Seri Wawasan Bridge, and the grand avenue with all the key federal ministry buildings.

Putrajaya, Cyberjaya, and indeed the whole MSC project has had its share of critics too. They say the project was too opulent, unecessary and cost too much taxpayers' money. They point to the fact that despite the beautiful architecture, the place remains relatively "lifeless" - little or no buzz.

On my part, I tend to think that Putrajaya is a beautiful project - easily one of the grandest government campuses in the world. I believe there are definite benefits in physically putting the ministries closer together, and this relocation out of KL has certainly helped alleviate traffic in the city (although more still needs to be done). It will take more time to create the buzz that the critics refer to, but it will surely come. When I bring officials from other governments to Putrajaya, Cyberjaya and the MSC in general, they never leave unimpressed.

even white elephants can be beautiful!

They have even more of such projects in Dubai.

The quality of government lies not in the beauty of its buildings but in the integrity of its political leaders. /Ali Baba

Yes, Putrajaya looks good but it is a grandiose scheme which cost Malaysians many billions of ringgit which could have been better spent on health care and education for the lower class. It is up there with the Petronas twin towers as symbols of profligate spending which a developing nation could ill afford.

I have no complain of our health care. I just pay RM1 per visit at govt hospital and that includes consultation and medication. I was refered to skin specialist at govt hospital and cost me RM1 pervisit. Recently I had a full medical check up at RM1. I wonder how much I have to pay if I go to private hospital. My son recieves free education icluding text books. I only spend less than RM50 per year on his education. I dont need to send him for private tution. He just watch tutor tv on still able to score straight As.
So whats there to complain. I am thankful to be Malaysian and so are my family.