I'm now in Danang, the third largest city in Vietnam. With a population of over a million people, Danang is located somewhat midway between the capital Hanoi in the north, and Ho Chi Minh City in the south. It's a coastal city located on the mouth of the Han river, and has beautiful beaches, relatively wide and well-planned roads, great seafood and a laid-back lifestyle (at least that's how it seems to an occasional visitor like me). This is my fourth visit to Danang.

A historical snippet is probably useful here. Danang was called Tourane during the period of French colonisation. That's why one can still see a lot of establishments still using that name - like Hotel Tourane, Sky Bar de Tourane, Tourane Spa, etc. But of course, Danang's dubious claim to fame came during the Vietnam War (or the American War, as most Vietnamese usually refer to it) when it was the landing point for the first major American troops

sent to fight here. They landed on Red Beach near Danang in March 1965 (see picture). Danang quickly became a major American base. Well, we all know what happened in that war. Eventually all US troops were withdrawn, and the area was turned over to South Vietnamese (ARVN) troops by end 1972. After the final offensive, Danang fell without bloodshed to the North Vietnamese Army in March 1975, only a few days after the 10th anniversary of the initial US troops landing.

But looking at Danang today, one would never have a clue to that part of its history.

I like Danang very much and have visited several times over the past three years for conferences and meetings. Usually I stay at the Royal Hotel Danang which is conveniently located (but rather spartan interior-wise), but this time I was in a much newer Green Plaza Hotel, which is just by the river. From the 19th floor that I am located, I have a great view of the river as well of the ocean somewhat further away.

Here's what the hotel looks like from across the street. Green Plaza is a 4-star hotel according to the travel brochures and websites. It's pretty good from what I've seen so far. There's a number of restaurants and cafes, a pool, a billairds room, a spa, a rooftop lounge,a disco (which I heard last night, but haven't actually seen) and a small row of shops.

Here are some of the nice views from my window and balcony.

Unfortunately it has been a little drizzly for the past two afternoons, so the skyline tends to be hazy. 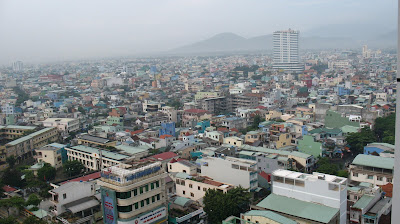 There are a few sites that tourists like to visit in or around Danang City. These include Marble Mountain (one of five mountains south of Danang that stretch from the coast inland, and which have lots of caves and tunnels - see picture below), the Danang beaches and Hoi An (a UNESCO designated World Heritage site and example of a well-preserved South-East Asian trading port of the 15th-19th centuries, where the buildings are are blend of local and foreign architectures). Danang has great aspirations to become a regional tourism hub, and everywhere one can see new developments - offices, residences and many, many hotels (along the same stretch as the famous Furama Beach Resort, I saw at least five new hotel developments, including the Hyatt and Crown Prince).

I'd also like to mention the unique round, basket boats that fishermen in Danang use. Very quaint and cute looking vessel. Here's me with some of these boats. 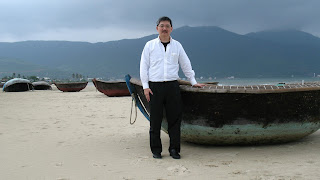 Well, this entry is beginning to sound like a page from a Lonely Planet guide, so let me change focus a bit and talk about something else - like the people. I've found the residents of Danang generally very friendly. This place is not as culturally sophisticated as Hanoi, but at the same time it is not commercially adultrated like Ho Chi Minh City (formerly Saigon). There is still a small town "innocence" about it. In many ways it reminds me of the Malaysian town where I grew up - Kuching in the state of Sarawak. Danang, like Kuching, is the small town/city that is perceived as the backward cousin of its more progressive kins, the leading cities (Kuala Lumpur, Hanoi, HCMC). But I think Kuchingites and Danangites (don't know if that's the usual moniker for residents of Danang :) know that the real secret is to develop gradually but maintain the more relaxed habits that make for a higher quality of life. In other words, stay away from the rat race as long as we possibly can because, as an old bumper sticker I read said "Even when you win in the rat race, you're still a rat" ...
Posted by James Yong at 2:15 PM

James, your narrative is informative but one thing is lacking -- no mention of willowy Vietnamese girls swaying in the wind? By the way, your pictures are too small. Make them as wide as the column width of your text so we can see more details. And give us one close-up shot of a pretty Danang face.

I love this last statement: Even when you win in the rat race, you're still a rat

I've been to Marble Mountain in Da Nang. There are lots of shops around that sell marble statues and other stuff. Very beautiful yet affordable.