This week I was in Jakarta, capital city of Indonesia, for three days. I stayed at the Grand Hyatt in the centre of the city. It's a very nice hotel with an adjoining shopping mall called Plaza Indonesia.

From the lobby lounge cafe as well as from my room, there's a great view of the huge roundabout that's sort of a landmark of the city. You know, I spent some time just watching scores of vehicles making their rounds and I couldn't figure why the road leading into the roundabout (on the right of the picture) was always so much more congested than the other parts of the roundabout. 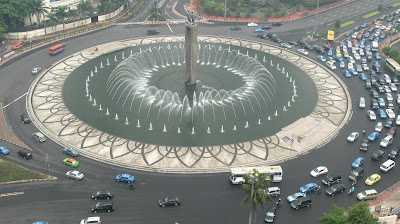 It's an intriguing time for Indonesia. Several significant events have been capturing the attention of the people, and even arousing passions in some circles ... 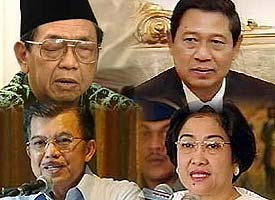 The Indonesian Presidential Elections will take place in May 2009, but many activities have already started in the build-up to the campaigning. Many individuals are making known their political aspirations - the usual political stalwarts like current President Susilo Bambang Yudhoyono, current Vice-President Jusuf Kalla, former presidents Megawati Sukarnoputri and Abdurrahman Wahid (who obviously want to go another round), former DPR speaker Akbar Tandjung, and newcomers like the Sultan of Yogyakarta.

I noticed party banners and buntings being strung up in various corners of the city. Not really very prominent yet, but it's still early days, and things will no doubt heat up in the coming months.

On the banners and posters, the faces of SBY and Megawati are easy enough to recognise. But I'm sure there'll also be young, new candidates who take inspiration from the Obama victory and like Obama, they will offer themselves as representatives of CHANGE, and hoping to displace some of the more prominent names on the election trail.

And speaking of Obama, Indonesians are pretty pleased with his victory, especially as he spent some time as a child living and studying in Jakarta. An "Indonesian son" is now Leader of the Free World. Imagine that !

(b) The passing of the Pornography Law

The Indonesian House of Representatives (DPR) passed this law recently. It was a very controversial piece of legislation. Some parties, especially the more religious-leaning ones, pushed hard for the law to be enacted. But many others were afraid that it was not well contemplated, pushed through too hastily and could be misused. The law's definition of pornography was also questioned because of the inclusion of the words "to arouse sexual desire", the meaning of which was considered too ambiguous.

Indeed, hundreds of people demonstrated in Yogyakarta, Solo and especially in the streets of Bali. The Province of Bali (being a popular destination for Western tourists) has officially rejected the law, putting the Central Government in a dilemma - if it accepts their rejection, it will be accused of giving the province special treatment. Conversely, enforcing the law would lead Bali to oppose it even more.
Even though the Bill has become Law, many feel that several articles in the Law are still problematic. I have a feeling this isn't the end of the Pornography Law story. The saga is likely to continue for some time to come.
(c) The execution of the Bali Bombers 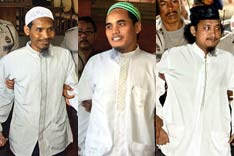 It was the end of the road for the three Bali Bombing convicts (Amrozi, Imam Samudra and Mukhlas). They had been sentenced to death five years ago after being found guilty of involvement in the October 2002 Bali bombing, which killed 202 people in the touristy Kuta area. The fatalities included 88 Australians, 38 Indonesians, 24 British, 7 Americans and others. The three convicts were imprisioned on the island of Nusakambangan. After many legal challenges and appeals, they were finally executed by firing squad in the early hours of Sunday 9th November.
Now the government is a little on edge with security stepped up at sensitive sites, just in case there's some militant backlash. Let's hope the concern proves unfounded.
.
Yes, the Republic of Indonesia is an intriguing country. In spite of its huge population, sprawling geography and obvious socio-economic challenges, most observers agree that over the past two years, things have been moving. Not always smoothly, but moving all the same. It's a little like that huge roundabout in central Jakarta. Once in a while, there's a bit of congestion. But overall the progress is undeniable ...
Posted by James Yong at 3:40 PM

"Progress is undeniable". I find that statement very interesting. It is like despite shooting themselves on their own feet, yet they could still progress. How many countries can tolerate this I wonder?

You're right, it is interesting. While some of its neighbours (eg Thailand & Malaysia) are embroiled in political wrangling, Indonesia seems to have its leadership still relatively intact. Despite intermittent problems - natural (eg earthquakes, floods etc) and man-made (eg delayed execution of bombers, mudslides, industrial accients) - real economic growth over past 2 years has averaged 6-7% which isn't bad.

Thank goodness, Indonesia is finally coming together, despite occasional threats from religious fanatics. One country which used to have religious and racial harmony but which has since been torn apart is the Ivory Coast. The north is under Muslim rebel troops, the south under a Christian-dominated government, and in between, the UN peacekeepers keep the peace.

Read more about Ivory Coast in my blog at http://flightstick.blogspot.com

Pak James, thanks for writing about Indonesia. Fully agree with your views. - Sami