I had my first real visit to Seoul, capital of South Korea, this week. In the past, I've had a number of interactions with Korean public sector officials and academics before, but never had a chance to explore the city of Seoul. Not that I had much time on this business trip, but at least I went to a couple of interesting places and saw quite a number of sites on the way from/to Incheon airport.

The economic history of South Korea is remarkable. Like the proverbial "phoenix rising from the ashes" of the Japanese occupation (1910-1945) and the Korean wars (1950-1953) - which brought widespread turmoil and destruction in the land - the country grew into an economic powerhouse by the late 80's. In the early years it was led by a series of autocratic leaders. When I was a teenager in school, my image of South Korea was always one of military rule with frequent civilian riots or protests. Between the 1960's-80's, South Korea industrialized very rapidly, adopting an outward-looking strategy. 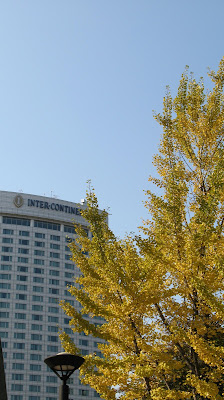 Today looking back, it is astounding to realise how the country achieved regional and global leadership in so many industries - shipbuilding, steel, machinery, automotive, consumer electronics, semiconductors, petrochemicals, information & communications technologies (ICT) and the latest exports of Korean music and television drama series (the so called current "Korean Wave") !
I stayed at the COEX Intercontinental, a very comfortable hotel in an area called Gangnam in Seoul. Next to the hotel was COEX, a huge convention centre from which the hotel derives part of its name. My company had its offices literally two buildings away. Within walking distance were a few shopping malls and tourist attractions (temples, parks and even the famed global headquarters of Taekwondo, the popular Korean martial arts). 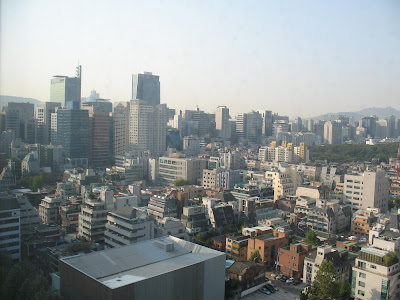 From my hotel room window, I looked out to one side of Seoul city - which wasn't really the wall of gleaming skyscrapers I had expected but reflected more a sprawling metropolis with low to mid-rise buildings. Seoul reminded me of an early-day Tokyo in some ways, and perhaps that's not coincidental since Korea was under Japanese rule for 35 years.
After a day and half of meetings, I did find time to go out for dinner with colleagues and friends, and on my last day even made my way across the Hangang river to the main shopping areas. 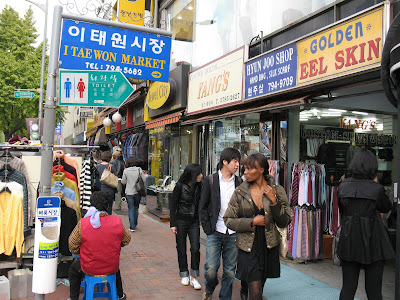 I visited Itaewon, a popular shopping street recommended by the hotel conceirge, and spent some time walking around there. Picked up the few ubiquitious souvenirs and trinkets to bring home. Ha, ubiquitious - now that's a word that Koreans seem to like a lot! It's all about ubiquitious government (u-gov), ubiquitious computing, ubiquitious city (u-city), ubiquitious Korea (u-Korea), etc ...

I also went to a street market area called Dongdaemun, with makeshift stalls selling all kinds of consumer products and Korean foods. However it appeared rather disorderly in the way the stalls were laid out - possibly because of a massive construction that was happening in the adjacent block. Many stalls were also not open. I suspect the place would look better in the evening with more stalls open, more lights to add to mood, and more visitors. I walked around for a while but didn't see anything I fancied. 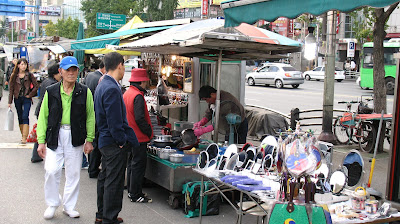 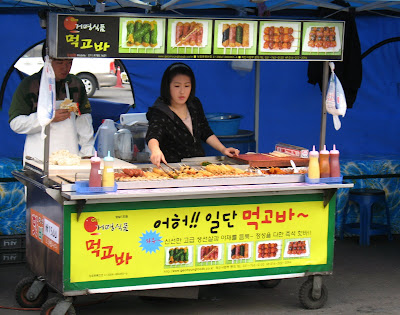 After a while of wandering around , I found the architecture of the historic Great East Gate, from which the area gets its name, more interesting than the wares sold in the stalls along the street. (Note that "dong" in Korean means east, similar sounding to "tung" in Chinese, and "mun" is akin to"men" in Chinese, meaning door or gate). This east gate of the fortress wall of Seoul was first built in 1397 (and rebuilt after falling into disrepair in 1869). It still looks very majestic, although a little out of place in its modern 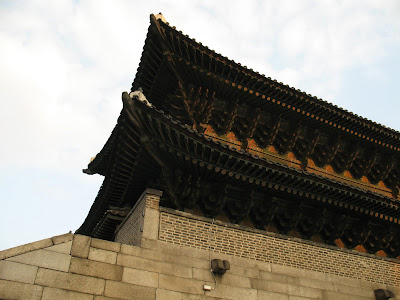 Well, this Seoul experience was certainly very interesting. I admit I was never much of a Korean fan (not having quite taken to their music or TV drama series), but I was pleasantly impressed by the city, the food and (despite hearing stories about the gruffness of some of the people) I found everyone I met very friendly and hospitable. Certainly I look forward to more exploration on any future visits. Annyeonghaseyo!
Posted by James Yong at 3:06 PM

Thanks for sharing. You know, I have yet to botheer going about in Dubai. Perhaps I think I have plenty of time for that later, especially when the weather is still too hot for my comfort.