Yesterday I was invited by my friend Tommy, a sommelier and owner of popular restaurant Cafe de Amigo in Singapore, to visit the "Wine for Asia 2008" exhibition and show at Suntec City in Singapore. There were over 150 companies represented there, coming from Europe, South America, Asia and the US. The exhibition was nicely laid out in neat booths along five or six lanes in a huge hall on Level 6. Many company representatives manned the booths, with bottles of wines of all varieties (varietals?) available for the sampling. It was naturally a very enjoyable experience, and I tried no fewer than a dozen glasses (only a small quantity in each, of course :-) 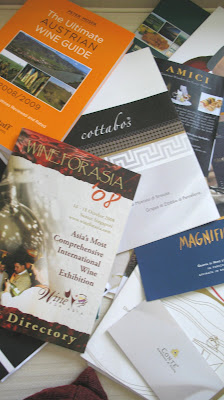 As with most shows and exhibitions, I ended up with a small stack of marketing collateral - brochures, pamphlets, flyers, namecards and so on. As I look through them, I found that the blends I tasted had come from countries & areas such as: Austria (Wien), France (Bordeoux), Italy (Palermo, Cecina, Sicily), Spain (Sabadell) and Argentina (Mendoza). I normally like red wines - like Cabernet Sauvignons and Merlots - but at this exhibition, I tasted some really smooth whites as well. 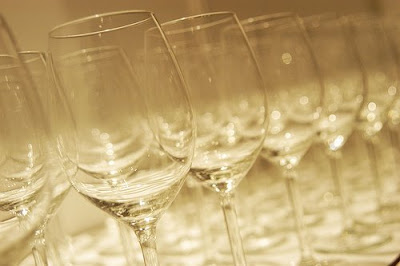 I had a look at some global wine consumption statistics from the Wine Institute. I'll share two sets of figures - per capita consumption and then total volume consumed.

First the per capita consumption figures available go up to 2005 (a little dated, but these kinds of figures don't fluctuate much from year to year, so I reckon they're still pretty accurate). The country with highest per capita wine consumption (in litres) is the Vatican City at 62 litres/person - I'm imagining a lot of tipsy cardinals and priests staggering around St Peter's Square ;-) Andora comes in second at 60 litres/person. France is third at 56. Looking further down the list, some interesting ones are Italy at 49, Spain at 35, Argentina at 29 and the UK at 19. The USA is surprisingly low at 9 litres/person. From Asia, the top country is actually Singapore at 2 litres/person, followed closely by Japan and Hong Kong, both just below 2. China is at 0.9, Taiwan 0.8 and Malaysia at 0.3.

Now that I've dazzled you with figures, don't expect any more deep insights or commentary today. I'm still recovering from yesterday's glorious consumption. But reading through the exhibition directory, I regret a little that there are so many booths and blends I missed - perhaps I should go back again for more exploration on the last day of "Wine for Asia 2008" today :-)

what wine exhibition? can anybody go? how come i dun know?

Sorry friend. The "Wine for Asia 2008" exhibition/show is over. Last day was yesterday.