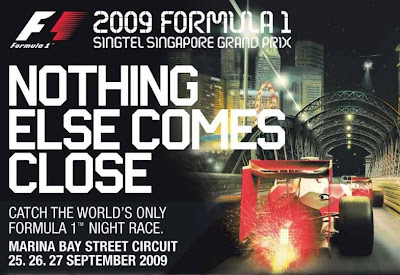 Vrooom. Vroooom. This weekend is when the Formula 1 Night Races happen, right here on the Singapore street circuit. It's the second time the F1 races are being held in Singapore. And things are beginning to heat up in this normally prim-and-proper (some say clinical and comatose) Lion City. There are posters everywhere. The TV and news media are chock full of articles and pictures of cars and the sexy lasses called the SingTel Grid Girls (kinda ambassadors for the event). I even notice ordinary drivers revving their engines a bit more, and occasionally letting their hair down with spurts of speed and execution of risky overtaking maneuveres on the Singapore roads.
xxx
Anyway for the F1 event, there are practice runs today, qualifying rounds on Saturday, leading up to the Grand Finals on Sunday. Should be pretty exciting for racing enthusiasts.
xx
Different people I know have varying opinions on the appropriateness of street circuits for motor racing, and some even question the realism of Grand Prix in general. And recent revelations of Renault's transgressions on this very same circuit a year ago simply reflect the utmost importance that some automotive companies place on being victorious ... win at all costs it would seem !
xx
Here's a map of the street circuit, around the Marina Bay area. 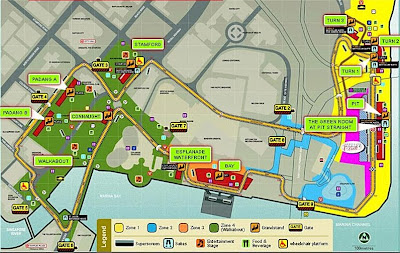 I must admit I haven't been a huge fan of F1. I don't follow the sport that closely and in fact until last year's race in Singapore, I hardly knew my Hamilton from hamburger, or my Schumacher from my shoe ... but still I have to say that it was quite a thrill watching the race last year, albeit on TV from the comfort of my living room. I'm not particularly partial to sweltering conditions, deafening noise and choking exhaust fumes ... but all my friends who have seen it "live" wax lyrical on the experience, and chide me for staying home.
xx
Of course, whether one watches it at the circuit or on TV, what many people look for are the crashes and mistakes and pitstop booboos (like last year where one car drove off from the pit with the fuel pump still not dislodged). Talk about schadenfreude !!!
xx
Even if one is not into F1 racing, a good thing about the Singapore F1 is that during the period, lots of entertainers and celebrities are in town. This year, the following artistes are performing at various venues: Backstreet Boys, Chaka Khan, Mavis Staples, Travis, and others. I'm told that even busty Beyonce is in town to do a concert !!! And there are also local and regional performers including Indigo, Electrico, Rivermaya, Strikeforce, Wicked Aura Batucada, Alemay Fernandez and the Dim Sum Dollies.

What I also find very interesting to observe, is how some of the familiar streets in central Singapore are being transformed into a nocturnal racing circuit. Huge panels of lights have been installed all around the track, the roads on the circuit have all been heavily reinforced so that a crash from a high-speed vehicle would not damage the surrounding infrastructure too much.

Ah yes, here's a badly taken videoclip of me driving on one section of the F1 circuit, a few days before they blocked it off for the event. Enjoy ;-)


I'll probably update this post over the next few days, with significant events relating to the F1 extravaganza. So do stay tuned.

With the F1 Race, alas, also comes the expressway crawls. The rest of us, mere mortals with non-supped up vehicles have to grapple with much much slower than usual expressways (i.e. Singapore version of highways). The ECP is almost non-passable during the evening after office traffic, and the rest like the AYE-CTE-PIE which I take is arghh ... moving at snail's pace ...