The Mid-Autumn Festival  ( zhōng qiū jié in Mandarin ) is also known as the Moon Festival. It is a popular East Asian celebration of abundance and togetherness, dating back over 3,000 years to China's Zhou Dynasty. In Malaysia and Singapore, we also refer to it as the Lantern Festival or "Mooncake Festival."


The Mid-Autumn Festival falls on the 15th day of the 8th lunar month of the Chinese calendar (usually late-September or early October), a date that parallels the Autumn Equinox of the solar calendar. This year it falls on 3rd October 2009. This is apparently the ideal time, when the moon is at its fullest and brightest, to celebrate the abundance of the summer's harvest. The traditional food of this festival is the mooncake, of which there are several varieties. 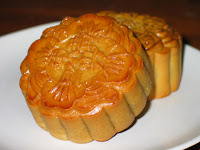 The Mid-Autumn Festival is one of the two most important holidays in the Chinese calendar (the other being the Lunar New Year). Farmers celebrate the end of the summer harvesting season on this date. Traditionally, on this day, Chinese family members and friends will gather to admire the bright mid-Autumn harvest moon, and eat moon cakes and pomeloes together. Other interesting customs include: carrying brightly lit lanterns, putting pomelo rinds on one's head, burning incense in reverence to deities, planting Mid-Autumn trees,and collecting dandelion leaves for distribution among family. 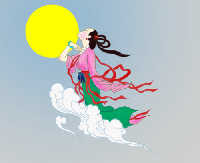 Children often hear the tale of the moon fairy living in a crystal palace, who comes out to dance on the moon's shadowed surface. This legend of the "lady living in the moon" goes back to ancient times, to a day when ten suns appeared at once in the sky. The Emperor ordered a famous archer to shoot down the nine extra suns. Once the task was accomplished, the Goddess of Western Heaven rewarded the archer with a pill that would make him immortal. However, his wife found the pill, took it, and was duly banished to the moon. Legend says that her beauty is greatest on the day of the Moon festival.

The other famous legend surrounding the Moon festival is linked into Chinese history. During the Yuan dynasty (AD 1280-1368), China was ruled by the Mongols.  The leaders from the preceding Sung dynasty (AD 960-1280) were unhappy at being subject to foreign rule, and began to furtively organise a rebellion. The rebel leaders, knowing that the Moon festival was drawing near, ordered the making of special cakes. Baked into each moon cake was a message outlining attack plans. The mooncakes - which the Mongols did not eat - were the perfect vehicle for hiding and passing along these plans. Families were instructed not to eat the mooncakes until the day of the festival, which was when the rebellion took place, and the government was overthrown. This led to the establishment of the Ming dynasty (AD 1368-1644).

Great stories, huh? Would make great swordfighting movies ala Shaw Brothers or John "Red Cliff" Woo. Anyway, always good to know the legends, customs and traditions behind any festival. Now who says this blog is not educational? LOL.

For those who celebrate it, do share how you spent your Mid-Autumn Festival ...
Posted by James Yong at 11:14 AM