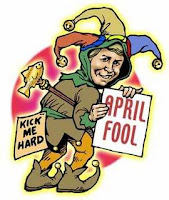 .
Yesterday was 1st April, which most people know as April Fool's Day or All Fools' Day. The day is marked by the creation of hoaxes and other practical jokes and pranks of varying sophistication on friends, family members, enemies, and neighbors, or sending them on a fool's errand, the aim of which is simply to have some fun and to embarrass the gullible or unsuspecting. Most of these jokes are small but some are pretty big scale. Some can be quite hilarious (except perhaps to the victims of the prank) and still memorable after many years.

I remember one April Fool's Day back in the late 70's when I was in London, the BBC's "That's Life" program announced that a new species of creature had been discovered. They showed footage of something called the Lirpa Loof which looked somewhat like a cross between a small monkey and a koala. They even showed the stool of this strange creature to be purple in colour and glowed in the dark (making good use of colour tv technology obviously). The announcer said the creature was now in captivity at the London Zoo. As a result hundreds of people called in and crowds flocked to London Zoo hoping to catch a glimpse of the creature.

Another joke I read about was when the BBC programme Panorama ran a famous hoax in 1957, showing Italians harvesting spaghetti from trees. They had claimed that the despised pest, the spaghetti weevil, had been eradicated. A large number of people contacted the BBC wanting to know how to cultivate their own spaghetti trees.

Another one is about Decimal Time. This has been repeated several times in various countries. This hoax involves claiming that the time system will be changed to one in which units of time are based on powers of 10. So in the "new" system, 100 seconds will make 1 minute and 100 minutes will make 1 hour. Hmmm ... this could have interesting implications for clock & watch makers, exam-taking students or runners trying to break sporting records.

Are there any good April Fool jokes you remember from your life?

Did you play any jokes yesterday and were they successful?

Did anyone get you yesterday with their April Fool prank?
.
Posted by James Yong at 3:13 PM