The Allure of the Wonder Girls

.
Pardon this minor digression into my personal enchantment with this musical group and its catchy hit song "NOBODY". Even if you've never heard of the Wonder Girls, a girl group from South Korea, I would suspect that many of you would have heard strains of this tune being played on TV, radio, music stores or even someone's mobile ringtone. 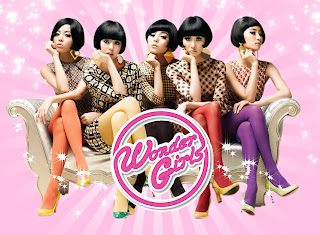 This is not usually the kind of musical group that grabs my attention, but I must admit their hit is extremely catchy and their performance style quite entertaining (I also find it amusing to imagine someone surnamed Chew or Chiu or Choo in the audience who must feel very flattered by their vocal rendition!).

The five person Wonder Girls, are managed by singer-songwriter Park Jin-Young of JYP Entertainment (who formerly managed that other Korean sensation, Rain ... tho' I must say I'm not as impressed by him!). This is an artifically constructed group with each of the five original members selected through auditions (kinda like the UK's Spice Girls a generation before). The Wonder Girls debuted in early 2007 and became popular later that year with the song "Tell Me." They have scored three consecutive #1 hit singles: "Tell Me", "So Hot", and "Nobody". In 2008, they won two Daesangs ("Artist of the Year" Awards).
.
Even more impresssive was the fact that the group entered into the American market in 2009, with the lead single "Nobody" - which also became the first song by a Korean artist to enter the Billboard Hot 100.

Enough from me ... Turn up your speaker volume to the max and enjoy the music video ...

LOL. After watching them, my son also keeps singing "I want nobody, nobody, but Choo !!"

Real catchy ... nobody nobody but choo (sneeze)

friend, the unpleasant side of asia - a master stroke of terrorism that blasts truth to shattered limbs of flesh.an existence conspired by idiots and burglars-- the only relevant literary idiom of the period ...... please view paatom-----paatom sever mozilla firefox, google.... google india

very interesting article and they are surprisingly impressive.