Beware the Ides of March

Today is 15th March. Do you know the significance of this day? Have you heard the phrase "The Ides of March"? If not, let me tell you the story ...

The Ides of March (Latin: Idus Martias) is the name given to March 15 in the Roman calendar. The term "ides" was used for the 15th day of the months of March, May, July, and October. The Ides of March was a festive day dedicated to the god Mars and a military parade was usually held.

However in modern times, the term Ides of March is best known as the date that Julius Caesar was killed in 44 B.C. According to philosopher and writer Plutarch, Caesar was warned by a soothsayer to be on his guard against a great peril on the Ides of March. On his way to the Theatre of Pompey (where he would be assassinated at a meeting of the Senate), Caesar saw the soothsayer and joked "Well, the Ides of March have come," to which the seer replied "Aye, they have come, but they are not gone."

This meeting of Caesar and the soothsayer is famously dramatized in William Shakespeare's play Julius Caesar, when Caesar is warned to "Beware the Ides of March."  The relevant passage goes as follows:

Caesar:
Who is it in the press that calls on me?
I hear a tongue shriller than all the music
Cry "Caesar!" Speak, Caesar is turn'd to hear.

Soothsayer:
Beware the ides of March.

Caesar:
What man is that?

Brutus:
A soothsayer bids you beware the ides of March.


It is clear that prior to Caesar's assasination, the Ides of March was just another day ...  but after the event, it took on a special significance. In the letters of Roman philosopher and statesman Cicero from the months after the Ides of March., he even writes, 'The Ides changed everything." The phrase "Ides of March" came to represent a specific day of abrupt change that set off a ripple of repercussions throughout Roman society and beyond. 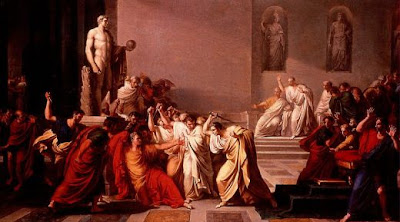 So why was Caesar killed? There were a number of reasons, but the main one was that some members of the Senate feared that he was going to revive the monarchy. The Romans had no love for kings. While Caesar had made clear public statements of turning down offers of kingship, he showed no reluctance to accept the office of "dictator for life" in February 44 B.C. (It is interesting to note that at the time the term "dictator" didn't have the negative connotation that it has today.) Indeed Caesar had been pushing his influence (and luck!) quite a bit. It has been noted by historians that Caesar was the first living Roman ever to appear on the coinage, an honour previously reserved for the gods. The plot's conspirators regarded themselves as "liberators".

So nowadays, those who know (or care to remember) regard the Ides of March as a day of infamy, somewhat like the better-known Friday the 13th. 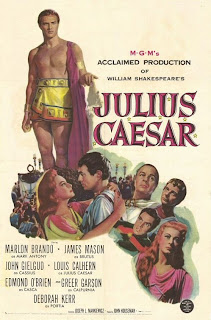 Looking at the influence of Caesar and his demise on modern culture, I note that there have been many movies and TV series depicting the rise and fall of Julius Caesar. For me, one of the best is still a 1953 screen adaptation of Shakespeare's work, whch starred luminaries like Marlon Brando, John Gielgud and James Mason. There was also an interesting mini-series from 2004 starring Jeremy Sisto (as Caesar) and Richard Harris (in his final performance).

I am told that the Ides of March is celebrated every year by the Rome Hash House Harriers with a toga run in the streets of Rome, in the same place where Julius Caesar was killed.

There is one US-originated music group who call themselves "The Ides of March" and at least two other groups who have released tracks on their albums with the name "The Ides of March", though I'm not sure they even mention Caesar as I haven't listened to any of those albums yet.

Anyway my friends, I hope you've enjoyed this little detour into a bit of history, culture and tradition ... Just to be on the safe side, grab your lucky rabbit's foot, coin or charm ...

Very timely and most nourishing to know that woe betide the ides if any of us choose to lose the lessons of Caesar (because he chose to seize her (Rome)!), or ignore the lore of yore, the ventures and adventures of debentures, metaphysical and physical, in how we thus live on the edge of the ledge of knowledge. Thank you for your post...keep it up, for it exudes much worth and value.

it is interesting to note the origin of these metaphors. It is a powerful way to bring home a message to an audience.

Did any of you catch the HBO mini-series "ROME"? Fantastic production. I loved it & bought both seasons on DVD.