.
I've been to the Philippines for work a couple of times over the past year. I usually go to Metro Manila. Recently I got to thinking about one of the most exciting sporting events that happened there back in the 1970s. How many of you remember the spectacle that the media called "Thrilla in Manila"?

Yes indeed, this was the World Heavyweight Championship boxing match between Muhammad Ali and Joe Frazier on 1st October 1975. It was fought at the Araneta Coliseum in Quezon City, Metro Manila. 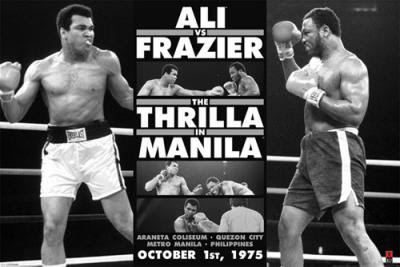 I went pass Araneta Coliseum on one of my recent visits. It's still looking good and hosting big shows. In fact in February and March, Taylor Swift and Don McLean are performing there. I believe Araneta Coliseum is still one of the largest indoor facilities in South-East Asia. 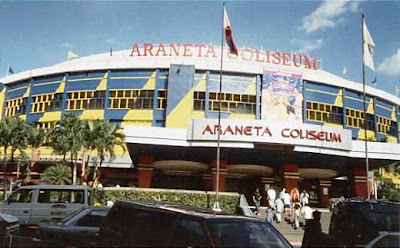 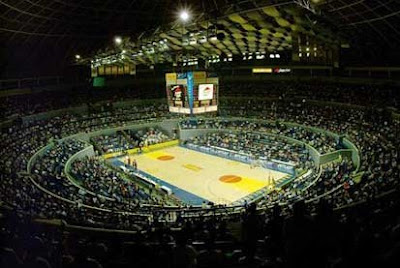 Anyway, back to the World Heavyweight Championship match ... The bout is often regarded as one of the greatest fights of 20th century boxing. It was the climax to the long-standing rivalry between Ali and Frazier over who was the legitimate Heavyweight Champion.  What happened before was that Ali (or Cassius Clay as he was previously known) had been stripped of the title in 1967 for his refusal to join the Army when drafted during the Vietnam War. Some years later, Frazier petitioned President Nixon to restore Ali's right to box, thereby bringing about a classic Trilogy of Fights between two undisputed heavyweight champions. 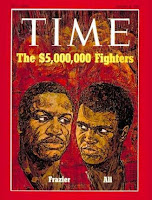 Both men were offered USD 2.5 million each, the biggest payout up to that time in boxing history. Anyone who was anyone was there. Even Frank Sinatra was ringside taking photos.

The bout was very brutal and ended with Frazier winning on points. Both men had to be taken to hospital but Frazier spent a little longer in hospital which allowed Ali to boast bout how much damage he had done, even as the left side of his own face was swollen. 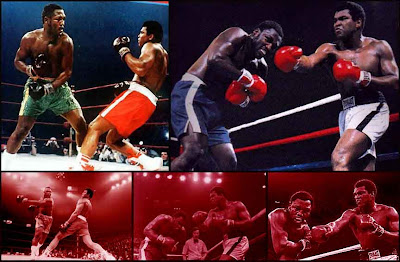 Although the rematch was a non-title fight, Ali put on one of his best performances and almost stopped Frazier in Round 2, but the referee Tony Perez stepped in thinking the round had ended. Ali won by a unanimous decision, thus earning himself the right to challenge George Foreman (who had beaten Frazier in 1973) to try to regain the Heavyweight title.

Ali did beat Foreman in Kinshasa, Zaire in the so-called "Rumble in the Jungle" in Oct 1974. The bout ended in a very convincing 8th round knockout.


This time Ali got USD 4.5 million and Frazier USD 2 million. In his taunting usual way, Ali promised that it would be"a killa and thrilla and a chilla when he got the gorilla in Manila". About 28,000 people packed the area, and 700 million more watched the match on TV worldwide.

Ali started attacking Frazier for the first 3 rounds.  In Round 5, there was a change in momentum when Frazier backed Ali into a corner and began pounding him. Ali rallied in the 11th, 12th and 13th Rounds and Frazier's eyes and cheeks began to puff up.Ali kept up the pressure in Round 14, trying his best to put Frazier away. Both men were exhausted but Frazier was clearly the worse off. His trainer, fearing a fatality as Joe had been taking countless punches in the head, decided not to allow Joe to come out for Round 15. It was all over.

Ali sensing the fight was done stood up to celebrate but almost collapsed in exhaustion. He later said of Joe Frazier, "He's the greatest fighter of all time ... next to me".

Here's a video clip of the last rounds of the fight ... enjoy.