Quotations on Democracy and Government 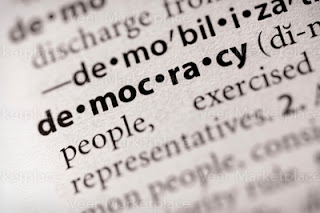 It's one day before the state of Sarawak goes to the polls (for those who don't know, Sarawak is the largest state in Malaysia, and where I grew up). Those who have been following this election would have observed the high and growing tension - fiery speeches, huge crowds and all kinds of snipes in the media. It is also rumoured that the Malaysian GE will probably come not too long after this. Other countries in Asia, such as Singapore and Thailand, are also having elections this year.

With all this happening, I felt it might be interesting and useful for us to take a few minutes, still our minds and reflect on a variety of quotations on the subjects of Democracy and Government, since that's really what all this is about. Some of the quotations are wise, some are cynical, some humourous. Think about them in the context what it is you are about to do or not do ...

And if by chance, some aspiring political candidates may be reading this, it might also serve as food for thought on what kind of government leader you will be if indeed you are elected.


No.1
"No one pretends that democracy is perfect or all-wise. Indeed it has been said that democracy is the worst form of government except all those other forms that have been tried from time to time"
(Sir Winston Churchill, former British PM)


No 2
"Democracy is a device that ensures we shall be governed no better than we deserve"
(George Bernard Shaw, author & playwright)


No.3
"It's not the voting that's democracy, it's the counting"
(Tom Stoppard, author)


No.4
"Democracy consists of choosing your dictators, after they've told you what you think it is you want to hear"
(Alan Coren, British humourist, writer & satirist)


No.5
"Democracy is two wolves and a lamb deciding what to have for dinner. Liberty is a well-armed lamb"
(Benjamin Franklin, one of the founding fathers of the USA)


No.6
"The most important political office is that of the private citizen."
(Louis Brandeis)


No.7
"Democracy is the government of the people, by the people, for the people."
(Abraham Lincoln, 16th US President)

Choose well. And have a good day.