In early July 2013, I fulfilled a long-desired wish and made my first trip to Myanmar. In this and a few subsequent postings, I intend to explore various facets of this country that I've been watching for some time now.

Myanmar (or Burma, as some Western nations still refer to it) was under military dictatorship for more than five decades (since 1962) and has been isolated by Western nations (specifically US, EU and Australia) through economic sanctions for many years. Myanmar's main ally is China, which is by far the largest investor in the country, which beside being resource-rich is also of significant geopolitical interest. ASEAN countries have preferred an approach of "constructive engagement" with Myanmar, admitting it in 2000 to their premier regional club.

Let's go back a few years ... This lead article from The Economist of 23rd July 2005 (which I got from my archives) laments how the different approaches had (at that point) not made much headway. 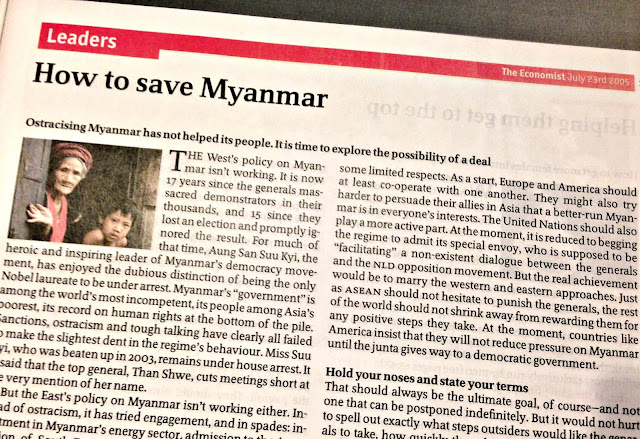 
Of course, many will know Myanmar/Burma because the world has been constantly reminded of its existence and its plight by the democracy icon and Nobel laureate Aung San Suu Kyi. More about this remarkable individual later.

Myanmar started showing signs of opening up and working towards political and economic reforms in 2010 when President Thein Sein took the helm, and pushed for a more open and democratic system of government. Since then the isolationist policies of the West have been steadily easing. As a result, there appears now to be a kind of "gold rush" mentality as many Western corporations make a beeline for the country to explore the so-called "Asia's Last Frontier".

In my first (and second) visits, I went to two cities, Yangon and Nay Pyi Taw. 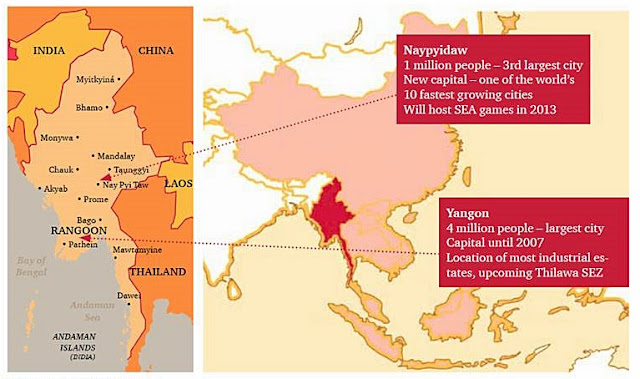 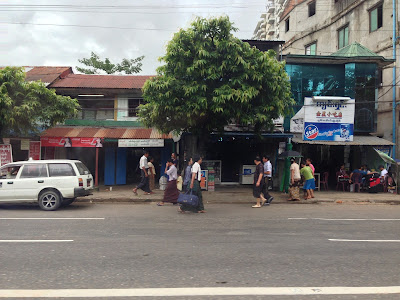 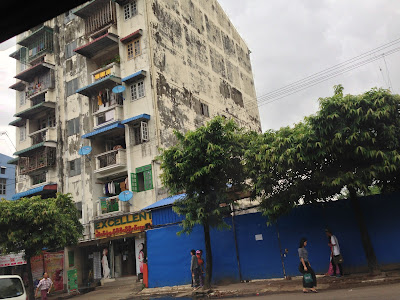 Fig 3: Some street shots from Yangon as we drove past


Nay Pyi Taw (sometimes spelt in different ways, such as Napidaw or Naypyidaw) is the political capital of Myanmar, which the generals created out of a greenfield location in central Myanmar in 2005. Since 2008, most of the ministries have been moved into this new location, and a city of more than a million people now exists. It has wide roads, large roundabouts with beautiful landscaping, with parks and new buildings springing up everywhere.

My first trip was with the US-ASEAN Business Council, where a group of representatives from two dozen US companies visited senior leaders of the country. It was an eye-opening trip. 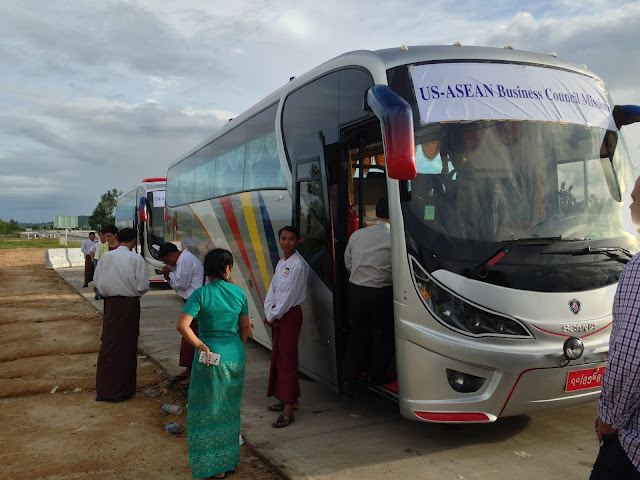 
On my first trip, we took a six hour bus journey from Yangon to Nay Pyi Taw. The second time, we flew (about an hour). 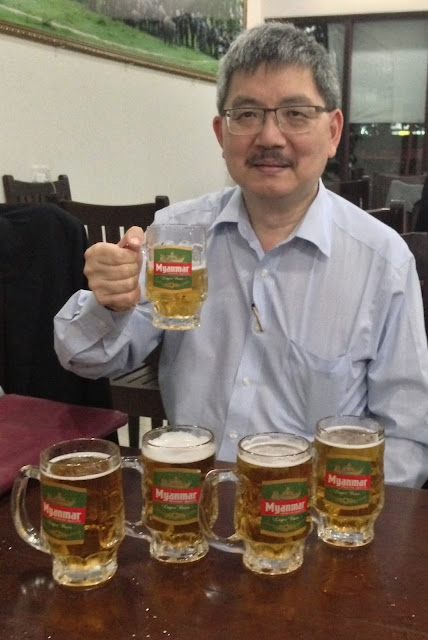 Fig 5: Had a chance to try the local brew ... which is really pretty good !


On the last evening in Yangon, I decided to visit the famous Shwedagon Pagoda. Huge and very  impressive especially at twilight, when the sky started to darken and the lighting came on. 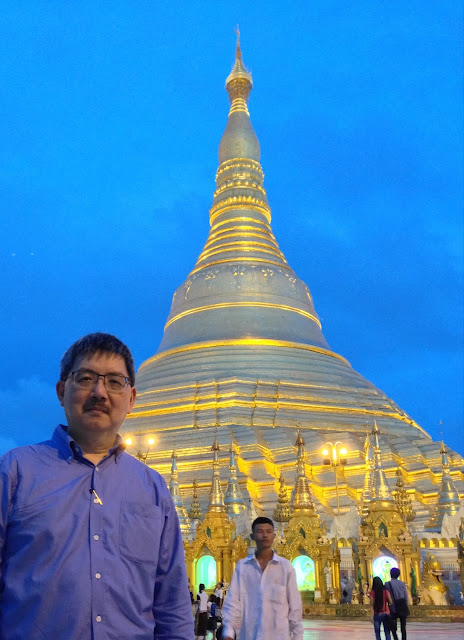 Fig 6: At the famous Shwedagon Pagoda


Myanmar is still in the early stages of development, compared to some of its neighbours. It will take time for it to address the various challenges it faces at this stage. The way I see it, among the country's priorities are:
- building up the ELECTRICITY infrastructure (blackouts are still too common and only 13 percent of households have access to a regular electrical suupply)
- improving the TRANSPORTATION sector (roads, rail, seaports and airports), which are still very under-developed, with a few exceptions (e.g. Nay Pyi Taw airport is quite modern)
- a strong refocus on EDUCATION, which has been somewhat neglected over the past decades (I am told that some 15 percent of Myanmar children don't go to school, and the average number of years of education is 4 years)
- enhancing AGRICULTURAL output. Some 70 pefcent of the population are engaged in agriculture, but the productivity is markedly lower than comparable ASEAN countries.


Let me pause here. I will go into other aspects of my observations in future postings.

Interesting. I plan to go to Burma this year. Where you recommend I should visit?

MYANMAR HOSTING SEA GAMES 2013, RIGHT? WHEN AND WHERE?

The 27th Annual South East Asian Games will be held in Nay Pyi Taw, the new capital of Myanmar. It will be from 11-22 December 2013.