The thirteenth day of the seventh month in the lunar calendar is called Ghost Day and the seventh month as a whole is the Ghost Month. It is believed that on this thirteenth day, the realms of Heaven, Hell (some say Purgotory) and the Living all become open for 30 days - allowing the spirits of the dead to roam the earth. Some even think that the ghosts will seek revenge on those who had wronged them during their lives.This tradition is practiced by Buddhists and Taoists, and can be observed in China (as well as other lands hosting the Chinese diaspora - such as Singapore and Malaysia), Taiwan, Vietnam as well as in Japan. The month culminates with the Festival of the Hungry Ghost.

During this festival, families pay respect to their deceased relatives and visit their graves, often accompanied by much feasting as if their dead relations were still with them. In order to appease the roaming spirits, people burn incense and forms of paper offerings - this includes

hell money, paper houses, paper servants, paper vehicles, paper TV sets ... I've even seen paper recreations of credit cards (Visa, Mastercard, Amex ... you name it. And of course, at least Gold if not Platinum) ! These offerings are symbolic of the materialistic comforts the living hope to pass on to their deceased loved ones so the spirit may have an easier existence in the afterworld. Someone has probably come up with a "package deal" which includes the Singaporean 5Cs (car, condo, credit card, country club & cash). Such ancestor worship, which is a form of expression of filial piety, is further practiced through praying rituals performed by hired Buddhist monks. 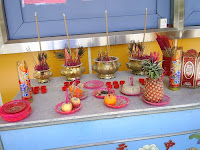 On the 15th day of the month, elaborate settings of delicious food items are cooked and offered to the deceased. This is to feed the spirits, and to ward off bad luck. Commonly found food items include roasted pig, fruits and cakes are also displayed on alters or in front of pictures of deceased individuals.

In addition, there is a belief that the roaming spirits too need to be entertained. In Singapore (and I'm sure many other countries too) this often extends into communal festivities, with crowds of residents thronging to catch shows

on make-shift stages erected all over the city. This practice is called "Getai" - the term originating from the Chinese characters "ge" meaning "song" and "tai" for "stage". "Getai" shows typically include singing, dancing and even acrobatics .

Last year, there was a Singapore-made movie called "881" (directed by Royston Tan) which was about two ill-fated girls who performed together on the "Getai" scene in Singapore, and had to face various rivalries from competing singers. The movie was quite a hit among the local audience.

Fifteen days after the feast, the festival will end, as the Chinese believe that the ghosts return to where they come from.

Over the next few weeks, we will be taking our cameras out to capture some of the very colourful and vibrant scenes of Ghost Month, so stay tuned for more on this festival.
Posted by James Yong at 6:10 PM

At least in my neighbourhood, I have always noticed more funeral wakes during the Lunar Seventh Month than most other months. They are also always chinese wakes, not christian, moslem or indian deaths.

who knows .. maybe the wandering spirits are mainly chinese & are looking for company :-(