I found myself in Bangkok for two days this week for some planning meetings. I've always enjoyed coming to Thailand, and I've found most Thais I've met friendly and hospitable. The tagline "Thailand - Land of Smiles" holds true ... for me anyway.

Stayed at the Grand Hyatt Erawan, as I normally try to do. I like the Grand Hyatt, which is on Ratchadamri Road in central Bangkok. Very comfortable and conveniently located, near the shopping areas (not that I had much spare time to visit them) as well as our Thailand office.

There's a prominent Hindu shrine at the road crossing, next to the hotel. The Erawan Shrine, dedicated to the Hindu god Brahma and Erawan, his (three-headed) elephant, is extremely popular, drawing a constant stream of devout worshippers every day. They come to burn incense, offer up coloured garlands and pray. Sometimes there are traditional dance performances to honour the deity. 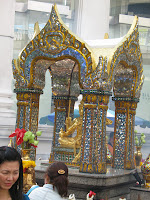 There are a couple of interesting stories about the Erawan area. The Erawan Shrine was actually built, at the advice of an astrologer, after several workers lost their lives in mysterious accidents during the construction of the Erawan Hotel in the mid 50's. It seemed the hotel project had plenty of problems.Besides the worker casualties, it was also beset by cost over-runs as well as loss of building materials. Once the shrine was constructed, no further accidents occurred. 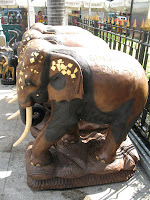 A more recent incident happened in 2006 when a Thai man, later said to be mentally unstable, used a hammer to smash the hollow statue of Brahma into bits. The crowd of worshippers, once having gotten over the initial shock, descended on him and basically battered him to death. I'm not sure how many people (if any) were eventually charged. A new Brahma statue was completed and installed two months later.

Thailand is still going through much political uncertainty. 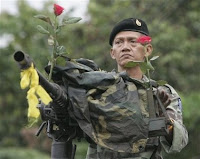 It has been almost two years since the bloodless military coup which led to the ousting of Prime Minister Thaksin Shinawatra in September 2006. Soon afterwards, his Thai Rak Thai (TRT) party was dissolved, and 111 executive members from the party were banned from holding political office for five years. At the national elections in December 2007, the newly formed People's Power Party (PPP) won with

a comfortable majority, and its leader Samak Sundaravej became Prime Minister. Critics cried foul saying that the PPP was just TRT under a new name and that PPP supporters were merely Thaksin supporters. Nonetheless the PPP together with a few minor parties formed the ruling coalition. Things have not been easy. The PPP continued to be pressured by the opposition Democrat Party. Some PPP politicians were charged for corruption. The abilities of the leadership have been called into question, with derogatory references to a "second tier" Cabinet. There's even a border dispute with neighbouring Cambodia over an ancient temple. 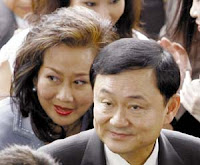 All throughout this period, Thaksin and his family have been constantly in the limelight. After more than a year of self-imposed exile in London, where he seemed to have a good time - he even bought football club Manchester City (which obviously got him a lot of media coverage by the football-crazy Thais) - he and his wife voluntarily returned to Bangkok. Charges of corruption and abuse of power were brought against him and his wife, Pojaman. Soon after the latter was sentenced to a jail term (although it is under appeal), Thaksin and wife apparently decided to slip away (after attending the Olympics opening ceremony in Beijing) back to London. The headlines in yesterday's "The Nation" newspaper said it all: "Thaksin Must Face Justice: Democrat". Moves have been initiated to seize his considerable assets and to try to get him extradited back to Thailand.

Yes indeed, Thailand is facing much political uncertainty. There's no clear light at the end of this murky political tunnel. So many things seem to be going wrong. And this political stalemate seems to have all stumped for breakthrough solutions. Perhaps a new shrine is called for. It worked for the Erawan Hotel. Perhaps it will work again for the Kingdom of Thailand.
Posted by James Yong at 7:59 AM