Pop Quiz: What is the connection between Borobodur and Singapore? (Read on for answer)

I have a little souvenir "stupa" on my desk at home. It's a pretty heavy bell-shaped object made from some form of rock, so it does well as a paper weight. I got it during my visit to the ancient Borobodur temple on the island of Java, in Indonesia about two years ago. A "stupa" is a symbol of enlightenment and an ancient icon of Buddhist art. Stupas are also very prevalent forms of Buddhist architecture, and are designed with deep symbolism and geometry. They are often filled with Buddhist relics and other sacred objects.

Borobodur is located 40km north-west of Yogyakarta and is a popular tourist destination. The Borobodur Temple complex, recognised as one of the largest Buddhist monuments in the world, is believed to have been built between the end of the 7th and beginning of the 8th century A.D. For about a century and half, it was the spiritual centre of Buddhism in Java, and then suddenly it was lost, overgrown by the jungle until its rediscovery in the 19th century.

The structure comprises about 60,000 square metres of lava rock, the whole complex sited on a hill. It is shaped like a stepped-pyramid with six rectangular levels, three circular terraces and a huge central stupa at the top. There are many stupas located all around, with a statue of the Buddha within each,

except for the main stupa itself which is empty, which as I was told, symbolizes complete perfection of enlightenment. There are thousands of bas relief carvings of scenes derived from Buddhist text depicting the life of the Buddha, including portrayals of hellish torture mixed with sweet pleasures. 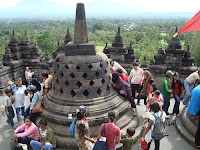 Back to my pop quiz question. What links Singapore and Borobodur is Stamford Raffles. Most people know that Raffles is credited with the founding of the city of Singapore. But less known is the fact that during his time as Governor of Java, Raffles was also responsible for the rediscovery of the ancient Borobodur site. While Raffles was on an inspection expedition to the north coast of Java in 1814, he learnt of a large monument deep in a jungle near the village of Bumisegoro. As he was not able to the site himself, he instructed a Dutch engineer named H.C. Cornelius to go and investigate. In two months, Cornelius and his men felled trees, burnt vegetation and excavated the earth to reveal the monument. Due to the danger of collapse, he could not unearth all galleries. He reported his findings to Raffles including various drawings. Thus Raffles has been credited with the monument's recovery, as one who had brought it to the world's attention.

Over the years, the Borobodur complex suffered much damage - both natural and man-made (including looting of various artefacts). From 1968-1973, UNESCO led a "Save Borobodur" restoration campaign. Today Borobudur is once again used as a place of worship and pilgrimage.

Reflection
As I get older, I find myself being increasingly interested in history. Perhaps it's because I see myself gradually becoming a historical relic too ;-) In reading about events in the past, I notice an unsettling pattern of repeated mistakes that mankind seems to have made. We certainly don't seem to learn our lessons well. Empires rise and fall in very similar ways. Wars are fought for equally dubious reasons (eg. the parallels between Vietnam and Iraq wars are uncanny).

I'm especially drawn to "lost world" scenarios. How could once prosperous cities and societies over time have declined so significantly to the point of near disappearing? I'm intrigued by the writing of such scholars like Jared Diamond, whose book "Collapse" covers this topic, on the disappearance of the Mayans, Greenland's Norse, inhabitants of Easter Island, etc. Why and how did it happen? Will there one day be a "Lost City of Singapore"? Or an "Ancient Ruins of Kuala Lumpur"? Or "Buried Bangkok"? A preposterous notion? Maybe. Then again, if we recall that Borobodur thrived for 150 years, maybe not ...
Posted by James Yong at 9:46 AM

History repeats itself, or maybe it rhymes. We never seem to learn from our mistakes. We need go no further than ourselves or family. We all have bad habits that we fail to kick. In fact, we might even find them quite enjoyable until pay day comes.