This is a continuation of my Vietnam entry on 25 July 2008. As I write this, I'm back in Hanoi for two days. It's been pretty warm here, with the temperature display showing 31 degrees C in the afternoons.

During my flight from Singapore to Hanoi, I sat next to a young Vietnamese man with a very cute little girl. We got to chatting and I found out that they had come from Auckland, New Zealand where most of his family had migrated to. The young man introduced himself as Mark Le, and he had been in NZ for seven years, and was working as a painter in the construction industry. The little girl was his six-year old niece Wen, who had been born in NZ and he was taking her for a two month vacation to Vietnam, so she could meet her grandmother who lived in Haiphong. Mark said he tried to go back to Vietnam once every few years - "whenever I have enough money" - but this was little Wen's first trip to Vietnam. She held a NZ passport, and Mark was telling me how he would have to pay US$25 to get her a visitor's visa when they arrived at Noi Bai Airport in Hanoi. 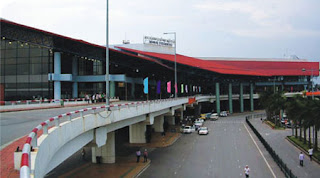 This was not the first time it has struck me how attached Vietnamese are to their homeland. Even though the individual might have migrated, or in some cases escaped the country (as in the "boat people" episode, if you recall their history), many Vietnamese (at least all the ones I've met) still maintain a strong bond with it. If possible, they want to visit frequently, even if they might not go back to stay for good. Wherever they bring their children up, they will try to instill a strong sense of identity in them - through speaking Vietnamese to them (Mark Le told me that little Wen could speak both English and Vietnamese, "but her Vietnamese very bad" he said, sounding a little disappointed) and teaching them about the customs and traditions from their country of origin.

"Viet khieu" is the term for the overseas Vietnamese. There are more than five million of them around the globe. They remit huge sums of money to their relatives or business partners back in Vietnam. In recent years, the Vietnamese government is trying to encourage them to return to their homeland. The government wishes to leverage on their wealth of knowledge, experience and financial resources, and also hope that returnees will choose to stay longer and participate in nation-building.

Crossing the Road in Vietnam - An Experience

Anyone who has been to a major city in Vietnam would have tales to tell about crossing the streets. If you observe how the traffic flows within the city area, it can be pretty alarming. The majority of vehicles are still motorcycles, but the number of cars and vans is growing quickly. The very first time I came to Hanoi, some five years ago, I stood at the curb for fifteen minutes, not daring to cross. Let's put it this way - traffic lights, zebra crossings and one-way street signs are mere suggestions rather than official rules. And at their cross junctions, where two more more streets intersect, many do not have any traffic lights at all - now that's scary! 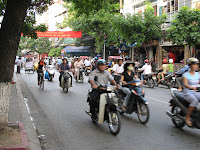 I've included some recent photos taken in the streets of Hanoi. Some good advice from my Vietnamese friends on how to get to the other side without any mishap: (1) Don't wait for a break in the traffic. Just go. (2) Walk slowly and steadily. (3) Look to the side of oncoming traffic (but also glance at the opposite side - you never know who might be driving the wrong direction). Of course in two-way streets, look carefully to both sides (4) Adjust your walking pace according to the oncoming vehicles (5) Don't run, go backwards or make any jerky movements.

Well, I've followed these instructions and am still alive after many 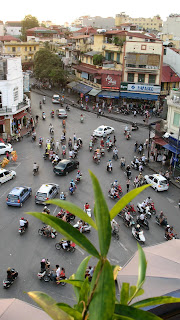 trips to Vietnam. Basically, if your movement is predictable, the oncoming vehicles will either slow down or weave around you. A Singaporean colleague of mine who lives in Vietnam used to say that in his analysis, the only implicit traffic rule that everyone tries to follow is: "don't kill anybody". Beside that, anything goes.

I've often thought that the Vietnamese way of street-crossing reflects something fundamental about the Vietnamese psyche or way of thinking. Firstly, there is a high level of tolerance for each other. It's a kind of "live and let live" attitude for fellow travelers in life. Secondly, people don't pay too much heed to rules in general. They simply do what they think works. Thirdly, there is no grand plan (or if there is, it's not obvious) - they know where they want to go, head in that direction & when they meet obstacles, simply adjust as they go along

Hmmm, this entry is getting longer than I thought. Looks like my comments on HCMC and Danang will have to wait till Part 3 on another day.
Posted by James Yong at 12:59 AM

yeah! i think i was crossing the scary roads with you 5 years ago!

Yup, that was my first visit to Hanoi and HCMC.

Nice post. Just wondering where you got my photographs that you're using in this?