My very first visit to Vietnam was in 2003 when I was invited to speak at eGovernment seminars in Hanoi and Ho Chi Minh City (HCMC). I didn't know it then, but this visit kickstarted a series of workshops and conferences I would find myself participating in over the next five years. In my current job*, I support various ASEAN countries, and as such I make fairly regular trips to Vietnam - mostly to Hanoi, occasionally to HCMC, and a couple of times to Danang.

It is probably true to say that Vietnam has become one of my firm favourite countries. I feel strangely comfortable there. The people are friendly, the local food agrees with me (it is usually vegetable or seafood based, which makes it healthy and tasty), there are many historical or culturally significant sites, and the place is relatively safe. 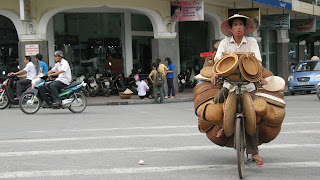 Despite its rapid economic growth over the past 7-8 years, Vietnam is still a developing country. I have lived most of they past 30 years in concrete jungles we call modern cities, mostly in supposedly developed economies, so I tend to find the pace of life in Vietnam a couple of notches lower than what I'm used to - which is absolutely great because it allows me more time for three important R's: reflection, relationship-building and relaxation.

I would like to share what I like about the three cities of Hanoi, HCMC and Danang. I will only cover Hanoi in today's blog, and continue with the other two cities in Part 2 another day. 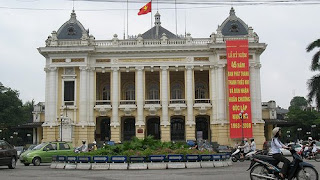 The national capital HANOI, located in the north, tends to be more conservative, more official-like, with more protocol. It also feels more cultural (I might be wrong here, but to a visitor like me, there seems to be more cultural or historical sites to visit in Hanoi than in HCMC). Here's the Opera House, which is very close to the hotel I normally stay at. 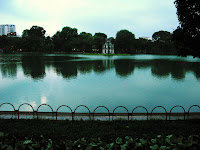 To illustrate the pervasiveness of the local culture, consider for instance the Hoan Kiem Lake. The lake is located right in the centre of the city, and there's a fascinating legend associated with it. According to a tale that dates back to the 15th century, King Le Loi, also known as Le Thai To, the founder of the Le Dynasty, found a holy turtle during a cruise on the then Luc Thuy, or green lake. The turtle told the King to return the sacred sword that had helped him defeat the northern Ming aggressors now that peace had been restored to the land. Le Thai To unsheathed his sword and threw it to the turtle, which caught the sword in its mouth and dived into the depths of the lake. The King later renamed the lake "Hoan Kiem" which means "Lake of Returned Sword". This is a story passed from generation to generation. 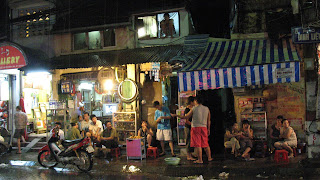 The Old Quarter in Hanoi is another fascinating place, that I love to wander around when the weather is cool. I am told that the Old Quarter retains a bit of the ambience of ancient Hanoi. The Old Quarter consists of a network of 36 streets, which bear the names of the goods that were originally manufactured by the craftsmen living on that street in days gone by, eg. Silk Street, Paper Street, Bamboo Street, etc. The Old Quarter is a great place to buy souvenirs or gifts. I also like to hang around the cafes of the Old Quarter just to watch the community that lives, works and plays there (ahem, this sounds like a company slogan I'm rather familiar with!). 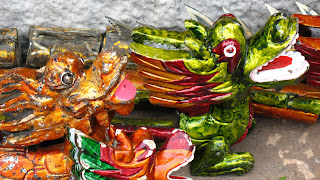 A unique & very colourful cultural experience in Vietnam is watching water puppetry. One can do this at the Thang Long theatre, at the edge of Hoan Kiem Lake. Backed by musical instruments such bamboo flutes, bronze drums, gongs, xylophones and other instruments I can't even name. The program includes ducks, snakes, dragons, buffalos and little people dancing and diving above and under the water surface. The themes played out reflect daily life of villagers such as farming, children playing, romance , as well as depictions of ancient legends.

Other places in Hanoi worth visiting are the Ho Chi Minh Mausoleum, Temple of Literature, Museum of Fine Art, and the West lake area.

Well, that's it for today's posting. As mentioned earlier, I'll continue to share my thoughts on Vietnam in subsequent blogs. Do give me any feedback you have or share your own experience travelling in Vietnam.


* Some of you may know that I'm with the Asia Public Sector team at Cisco Systems, the global communications & collaboration company.

Note: All the photographs included in this blog were taken by Jemima Yong (jemimayong@hotmail.com)
Posted by James Yong at 2:18 PM

Keep blogging because I am really interested to ready your stories. We haven not much time or opportunity to catch up and so this is a good way to share your life with your friends. May be I should do the same after I relocate from her. :-)

Beyond the colour and culture, do you feel that places around us are getting more polluted?

Was at HCM 2-3 months ago and I thought the air has become worse... was in BKK last week and it was the same..

SGP isn't any better with the island resembling a major construction site..

where are the trees?

To Anonymous (whom I think is KSC): Yes, I think you should start blogging about your experiences away from Singapore. It will be a great way to keep in touch.

To FlyingPan: Unfortunately for many countries, the price of rapid development tends to be pollution. I hope the respective governments are taking adequate measures to ensure a greener and more sustainable path forward. It is a tough balancing act.