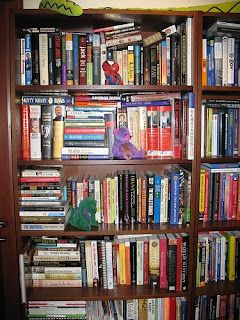 I love books, I read extensively and I have a pretty sizeable library. I've had an affinity for books and reading as far back as I can remember.
When I was in Primary school, I used to go through whole series of storybooks from various authors I liked - authors like Enid Blyton, Hugh Lofting, Capt. W.E. Johns, Agatha Christie, Alistair MacLean and the like. In secondary school, my attention turned to Arthur Hailey, Jack Higgins, Sidney Sheldon, Ian Fleming and Harold Robbins. Later still it was John Grisham, Jeffrey Archer, Dan Brown, Robert Fulghum ... I don't know exactly when the turning point came, but at some stage shortly after I started working, I began to read less fiction and more non-fiction.

These days, it's more books on business, government, management, history, technology, self-improvement and biographies. An occasional fiction title does creep in, but not that frequently.

My habit is to read a number of books concurrently - five or six is not uncommon, although I have a bad habit of jumping to new titles before I complete a previous one. Usually (but not always) I do come back to complete the first title. A quick scan at the stack of books beside my bed reveals the following titles:

* Mao : A Life - by Philip Short
* The Real History of World War II - by Alan Axelrod
* Memo to the President Elect - by Madeleine Albright
* South East Asian Affairs 2008 - ISEAS publication
* The Extreme Future - by James Canton
* Emily of Emerald Hill - play by Stella Kon
I also recently bought the 15th Anniversary Edition of one of my all-time favourite books "All I Really Need to Know I Learned in Kindergarten" by Robert Fulghum.
Finally I think I'll make this a regular blog entry - maybe once a month, I'll include a "What I'm Reading" entry so as to track how my reading habits change (if at all). I'll be interested if nobody else is ;-)
Posted by James Yong at 3:44 PM

Where do you store all the books you keep buying? I investigated some ebooks using e-ink but gave up because they are over priced and also cannot be annotated. Amazon kindle is impractical. It is mainly a US market product.

Well, I did have one room with largely wall-to-wall book shelves, but that sorta filled up a year ago. So I resorted to a couple of extra IKEA cupboards ;-)

wow...you r the 2nd one that i've heard to have so many books... the 1st one is our Korean pastor, who also has the wall-to-wall book shelves in his office & home...i'm always wondering how much efforts needed to classify & manage the books... maybe need to employee a librarian...ha...