I spent a relaxing week in London earlier in December 2008. When in London, one of the places we always enjoy visiting is Portobello Road, particularly on Saturdays when the street market comes alive. Portabello Market is popular with tourists and locals alike. For those who are not acquainted with this place, the road swings between Notting Hill Gate and Ladbroke Grove tube stations. It is best to go earlier in the morning (say 9 or 9:30), and allow at least 3 hours for a leisurely walk, slowly browsing through the various stalls & shops, and taking short breaks at the cafes.

On Portobello, one will find numerous antique shops and stalls, a rich collection of old sketches, books and maps, different kinds of food stalls and cafes, multiple souvenir shops, some fashionable clothing shops and buskers. It can get pretty crowded at parts of the road, so always a good idea to keep an eye on your wallet or handbag. 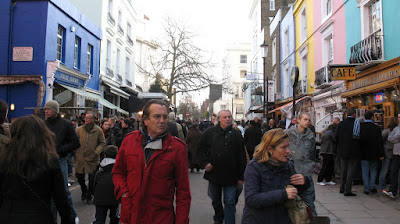 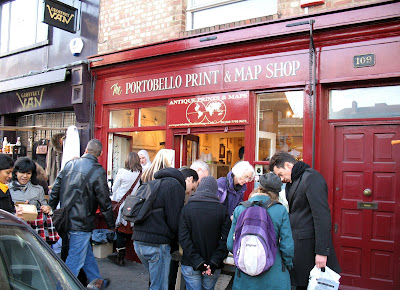 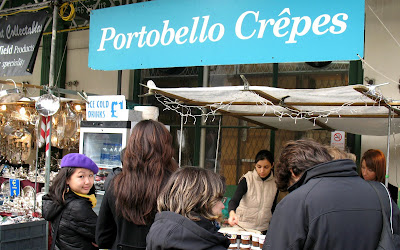 The origins of name Portobello is quite interesting. The area was originally a farm, which was named after Puerto Bello in the Caribbean, in memory of Admiral Vernon who captured the town in 1739. 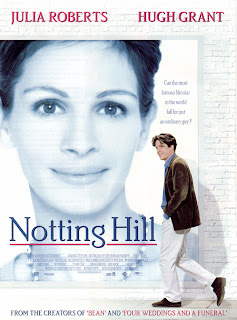 Since then the area became built up with houses, shopfronts and the street market. Some of the pubs are named Portobello Gold and Portobello Star, references to those heady seafaring days off the Spanish Main. One of the antiques arcades is known as the Admiral Vernon.

Portobello has always been a popular tourist site, but it really shot to global view in the early 2000's as one of London's trendiest streets after the movie "Notting Hill", starring Julia Roberts and Hugh Grant, was released in 1999. People started coming from all over the world to visit the street they had seen in the popular film. There was a property boom in the vicinity soon after. I heard a sad story of someone selling their apartment in the area only a month before the movie came out. What a lost opportunity to cash in!

I particularly liked looking at one stall with a wide selection of old cameras on display ... 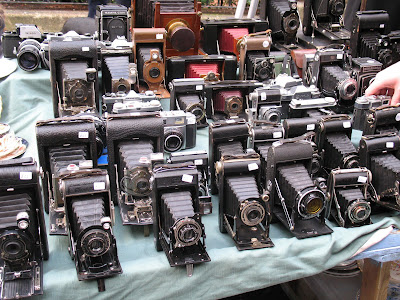 One of the busking groups playing when we were there was a trio called "Hightown Crows". Tneir music was very catchy and entertaining, albeit a little rough on the edges. They even flogged their with own CD of original tunes at ten quid each. 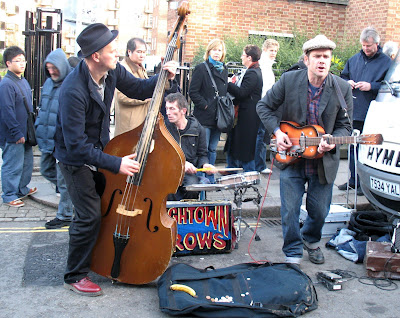 Rustic street markets complement shiny shopping malls, and often give a city more character. I've often wondered why street markets (both day and night versions) work in some places and not in others. For instance, Kuala Lumpur (Malaysia) has its bustling Petaling Street / Chinatown night market. Taipei has a couple of popular night markets, notably Shilin and Snake Alley. In Hong Kong, there is Temple Street market in Kowloon. Bangkok has a few, at the Suan Luam and Patpong areas. Seoul has an area called Dongdaemun (which I visited on one of my trips and wrote about in a previous blog entry). Singapore has tried setting up street markets but they don't seem to have lasted - I remember one of them was around Kallang.
.
This is by no means comprehensive, but I concluded that a few factors do help to make street markets successful: (1) some local culture & history helps - eg. Portobello's antiques draw a lot of collectors; (2) some unstructuredness is appealing. Visitors like the slightly haphazard way some street markets are set up, and how individual entrepreneurs innovate to attract customers; (3) pirated or counterfeit goods on sale - despite many raids by authorities, the market for fake bags, watches, garments, CDs and DVDs still remains a definite draw; (4) ability for buskers and other performers to showcase their talents, without being too worried about being arrested (5) some element of sleeze helps - need I say more?
Long live street markets !
Posted by James Yong at 9:37 AM