I was travelling most of December. Business trip in Sweden & Oslo, followed by a week's vacation in London. So most of my reading was done on planes, in airport lounges and briefly before bed. All books this month. No audio and video of any significance. These were the three books I picked up ... 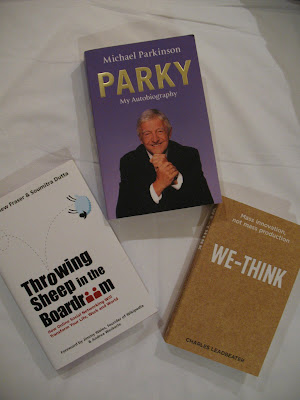 "Parky" is the autobiography of Michael Parkinson, the British television interviewer who is almost legendary in the UK. I remember watching his programmes while I was a student in the UK back in the late 70's to early 80's. His interviews were sometimes thought-provoking, sometimes funny, always classy and entertaining. His programme, simply called "Parkinson", ran from 1971 to 1982, and from 1989 to 2007. When I was watching his shows, he was with BBC, but I read that he switched to ITV in the later years. 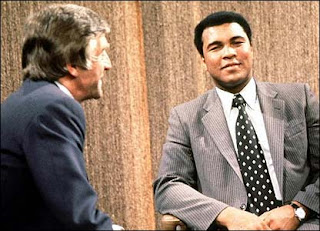 By his own reckoning, he has interviewed some 2,000 of the world's most famous people. So this was an autobiography I was waiting to read for some time. You could say I was a fan.

"Throwing Sheep in the Boardroom" is by Matthew Fraser & Soumitra Dutta. I first heard of this book directly from Matthew Fraser, who is a Facebook friend. The book deals with the whole Web 2.0 social networking revolution. The book makes the point that while the Web 2.0 has reached a tipping point socially, especially among the so called 'Generation V' (also called digital natives or millenial generation by other literature) who feel completely at ease in the online world, it is facing powerful forces of resistance from members of corporations, including boardroom members. Based on my own experience dealing with eGovernment initiatives, I know this, and I was interested in specific examples of how such resistance could be managed, and broadly of how Web 2.0 could be effectively employed by business and government. 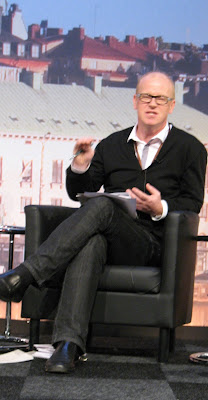 "We-Think" is by Charles Leadbeater. I've just started on this book. I saw the author speak at my company Cisco's Public Services Summit which I participated in at Stockholm, Sweden earlier this month. Charlie is a persuasive and entertaining speaker, and made good points about how businesses and governments needed to change to take advantage of the opportunities of "mass collaboration" and "mass innovation", and not be stuck in the old paradigm of "mass production". The inside cover of the book ends with this .. "The generation growing up with the web will not be content to remain spectators. They want to be players and this is their slogan: we think therefore we are". Also check out the website.