A Tear for Thailand

So far I've posted at least two entries about Thailand, both of which have been quite upbeat. I really like Bangkok and Thailand in general. The place has so much culture and vibrancy, and I always look forward to my visits. I also love Thai cuisine, which is both delicious and delicate. Over the years I've made many Thai friends. However as I follow what's been happening on the political scene over the past three years, and especially over the last few months, I feel sad for the country.

Economically Thailand was once one of the fast-growing Asian Tigers. With the political and social turmoil over the past three years, its economic status has declined significantly. Former strongman Prime Minister Thaksin Shinawatra was ousted in a bloodless military coup in 2006 and his TRT party was dissolved. Thaksin has been in exile since, first in the UK and apparently now in Dubai. Elections were held about a year after the coup, but the coalition which won was led by PPP (a party formed by many of the previous TRT members), which the Bangkok elite - led by the PAD - deemed a proxy of Thaksin. The PAD and other anti-government parties led widespread protest rallies in the capital Bangkok. Legislative means was used to topple PM Samak Sundaravej, over what seemed to be a small legal technicality - accepting fees for a cooking programme he did while as PM. Replacing him as PM was Somchai Wongsawat, a respected burreaucrat but also brother-in-law to Thaksin. He faced strong opposition and criticisms from the very first day. Thaksin did return to Bangkok once but fled just before the courts passed judgement on him in corruption allegation. But he still wields much influence and has many supporters, especially from rural Thailand.

A few months ago, the anti-government protesters (the "yellow shirts") took over Government House, where the office of the PM was located. 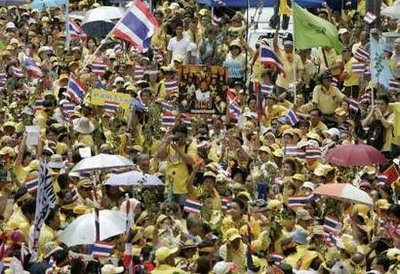 Last week the protesters took over the Suvarnabhumi International Airport, stranding over 300,000 foreigners in Thailand. As of this posting , the airport hasn't yet opened, and Thai society has been feeling the brunt of being isolated from other countries. Worse, the government seemed powerless to remove the protesters from the airport, because the head of the military refused to get involved, and even the police seemed ineffective.

Pro-government protesters (the "red shirts") then also started gathering in central Bangkok and there were fears that violent clash between the two camps would erupt. Then yesterday, the Constitutional Courts ruled that PPP had to be dissolved, and the PM Somchai was banned from poliics for five years, because of vote buying among its members during the elections. The anti-government protesters cheered in jubilation. The pro-government camp fumed and cried foul.

So what will happen next? Another round of elections most likely will be hastily called. Largely the same people who formed the PPP, minus the ones who are disqualified from politics, will likely create a new party, and chances are they will win again, because of the strong support from the rural population. Then we will go into yet another round of political confrontation. Some local observers say that to get out of this mess, the King should say something. But Thai royalty has usually tried to stay above partisan politics, so whether some royal direction will come is highly unpredictable.

Meanwhile the country plummets into a vicious cycle of further decline. After this airport closure fiasco, tourism will no doubt take a massive hit. Business people will also think twice about investing in a country where the political climate is so uncertain. And the local Thais will suffer.

I suppose as an outsider, it isn't possible to fully understand all the sentiments and forces at play here. But most of the political observers I speak to shake their heads in disbelief at how a peace-loving people like the Thais, led by usually rational, intelligent leaders, can let their country fall so deep, so fast. How can a dispute between two relatively small groups like PAD and PPP engulf the entire nation and bring everything to a standstill?

I also wonder whether what's been happening in Thailand could also happen in another country? What were the missing checks and balances in the case of Thailand? What lessons should other countries learn from this? Good questions to ponder over as we shed a tear for Thailand.

seems like anything can happen anywhere in the world nowadays.

It is indeed sad to see a country so wonderful and claimed to be a country of smiles turns their own country into a place where people may avoid for awhile.

What is the world becoming to? There seems no end to the political issues in these countries, moreover, amidst the financial crisis....

Things are just not going to get any better....

I get the impression that the king is also anti-Thaksin. That is why the military did not go out and evict the PAD from the airports. Weren't they blatantly breaking the law? Thaksin's "crime" was he tried to "liberate" the rural poor. The elite do not welcome the social transformation that will come with Thaksin's reforms. Those with vested interests in keeping that status quo pointed out that Thaksin was trying to destroy what being Thai means and also weakening the influence of the monarchy.

Only the King has the influence to break the stalemate in Thailand. Time will tell if he has the will to do it